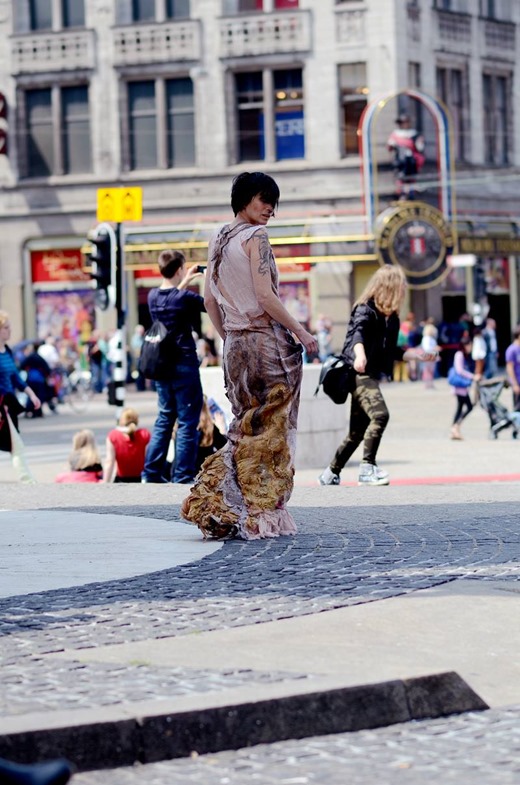 The “school year” has been quite rich with experiences, workshops Irit and I gave in different countries of this world. We just returned recently from our workshops in the Netherlands…

Through all last 4 years of teaching workshop organizers were interested in different things – some just inviting and enjoying the programs we offered and taught many times before, some interested in some modifications, and some sometimes pushing for focusing how to make an advanced program for the same students.

I remember one conversation with one workshop organizer discussing the particular matter when I just had to say that I am not interested in making students dependable on their teachers in their creative growth and just offering new and new programs every year for the same students. I believe a good teacher is the one who stimulates the student, “opens” some kind of section in their brain, and after this revelation for the students, they can do oh so much in their creative felting just from taking that one workshop with the right teacher. Don’t get me wrong, I have students who come to be taught by me or by me and Irit once again or even the third time, but on different subjects or completely different concept, they are not the dependable type. They work on their own a lot and from the time we met they have made very big progress. I had in mind the kind of teaching when organizers make level 1, level 2, level 3 every year or every half year and make the students believe they must take it.

The other thing that amazed me all the time was the fast food attitude towards learning things in felt making workshops…. It really doesn’t matter who taught and what was taught – some people just come and learn the very surface of it, just because it is fashionable, and then they throw it away from their heads the next morning, and jump into something else. Never going deeper, never finding and refining themselves in what new they have just learnt.

I have been teaching fabric manipulation for 4 years now. One may ask when enough is enough? If the thing is really yours and until you haven’t explored all the depths and transformations of it, it is never enough, else it is just sliding the surface.

So we never let us be pushed by demand of workshop organizers about developing commercial workshops just because they needed it. We took the whole circle of changing seasons – we sowed an idea, which was growing slowly, sometimes with hardships, sometimes with impossible lightness, until we reached the time of the harvest! Naturally, by ourselves. And just because we went down into the depths of what we were doing already.

Irit and I developed a new direction, concept that we are now putting into our new work and that we put into our Cyprus workshop program. We were analyzing carefully our own work and botanical printing, natural color in general a lot, trying to answer questions like theoretically it is perfect, but why not in real? We noticed what was lacking and what had to be the concept point actually. We got connected with natural color so much. And fused it with felting, looked for more advanced and sophisticated ways for the eco print color language and felting language to go hand in hand.

Every time the wave of creative joy catches you, you are full of desire not only to use it yourself, but also share with others, who, you hope, will also understand and go deeper and deeper with you to all the explorations – first together in the workshop, and then separately, everyone on their own.

I remember our first time Cyprus workshop participants were feeling so high during the workshop and after and were asking us, please make it happen the next year. We said we will think about it. And after returning home we have been discussing with Irit the subject through millions of letters between us. Something was not going right. And the answer was – there was inner pressure, feeling of obligation to the students to offer something new to them, so they could come. Once we revealed it to ourselves, we could get rid of this idea and say to ourselves, no, we don’t have to. We can offer the same program to new students if we just want it to happen again, but we will not force a new program. That was a moment of lightness. But we didn’t go with a stream, we became a stream. Because the minute we set ourselves free from making something for others, we got much deeper into what we were doing for ourselves. Our work, things that interest us, the directions we want to go next. And that created a stream. It was the moment of Eureka

Thus, naturally and without any force the Cyprus program was born too. Not because someone asked (and little of last year participants could really stick to their dream to come again with us to Cyprus..), but because we found our way, we did it our way.

So here we are, offering to give out to others something that is dear to us like our own child

RECONSTRUCTION. I believe in our minds too

Someone asked me once why you are putting so much effort that doesn’t really pay off that well to this Cyprus workshop, when you can go and teach where other organizers invite you, not care about anything and simply work and earn for what you work. And I answered. Because I love it. I love creating the program, surrounding, atmosphere from the beginning with Irit, to put our visions and love of the subject as well as teaching without any regulations of the strangers, to a material world and to give to those who come. And those who come are also special, they are making effort to get there and they come because they want to go deeper and not slide the surface. For sliding the surface it would take too much effort, not worth it

And because teaching and learning in some remote environment from your home is so so different and much more enriching than when you bound physically or mentally to your home and people around. Mrs. X from country Y is not the same Mrs. X in Cyprus as she is in her country Y

Something in the air opens her up and makes it a much significant learning experience than anywhere near home.

So we do it because our Cyprus workshop is the most honest act of teaching, sharing and giving that we can offer from all the other things. We make it special, like nowhere else, and we and the students feel it like that. At least that’s what we want to believe in…

Well said. We should always be teaching to the potential in our students, the project is unimportant.

Very well spoken. Thanks for sharing your thoughts.

Vilte, if I fully understand your words, you say....I teach the way that's mine and Irit's. The two off you have a flow that is as it is and that's good. I totally agree if I understand well .
the two of you matches so good...i'm so in love with your work.
I met Irit in person and hope to meet you too in amsterdam. It's not as it would be in Cyprus ( my back is broken so that's impossible) but for me it's kind of yvette in amsterdam and not yvette in haarlem...a totally different world. But actually..if I'm with my felt everything else is far away...it's kind of meditation for me..felt?..
till in amsterdam!

Vilte, if I fully understand your words, you say....I teach the way that's mine and Irit's. The two off you have a flow that is as it is and that's good. I totally agree if I understand well .
the two of you matches so good...i'm so in love with your work.
I met Irit in person and hope to meet you too in amsterdam. It's not as it would be in Cyprus ( my back is broken so that's impossible) but for me it's kind of yvette in amsterdam and not yvette in haarlem...a totally different world. But actually..if I'm with my felt everything else is far away...it's kind of meditation for me..felt?..
till in amsterdam!